Robert Hermann Leinweber founded the company “Land- und See-Transport-Kommanditgesellschaft auf Aktien” on 26th June 1923. It was shortly afterwards that a cooperation agreement was signed with “Transportkontor Düsseldorf G.m.b.H”. The address of the registered office was Holzdamm 59, Hamburg and the main field of business was inland waterways transport of all types of goods.

The headquarters were later moved to Kattrepelsbrücke 1 in the Hanseatenhof, Hamburg.

On the 24th of July, 1928 Land- & See-Transport carries out his most spectacular transport in its young history: The new arches of a bridge for the new Elbbrücke of 1885. The necessary steel shares are transported by inland ship from Rhineland to Hamburg and are joined there. The completed bridgearches are loaded onto several barges, these are brought in the right position with flood, so that with low tide the arches can be set down at her final place.
The bridge is still in use today for the buslanes from Hamburg-Veddel to the city centre. We still feel so conected to this bridge, that we wanted it to be part of our head graphics on our homepage, where you can find it onthe right margin.

Land- & See- Transport was converted from a partnership limited by shares to a limited partnership.

The photograph below shows the workforce in 1935. It can be quite clearly seen that Land- & See- Transport is a real family-run business.

Due to the considerable damage caused by bombing during the War, it was necessary to move to Ferdinandstraße 25 / 27 in Hamburg. The company still continued to focus on the transportation of all kinds of good, especially those requiring water-borne transport. All transport operations at this time involved a high degree of uncertainty and much organisation: For example, were there any functioning cranes in the port, or was the river blocked by the remains of blown up bridges?

Robert Gustav Hans Leinweber returned home from a prisoner-of-war camp and recommenced his work in the family business. 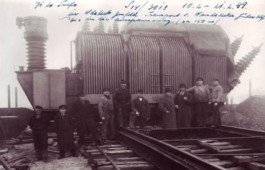 The company moved to bigger premises at Brandstwiete 29 in Dovenhof III, and a new line of business was started: Heavy goods transport. Transformers, reactor vessels or printing presses were delivered from the manufacturer by rail, they were then loaded onto trucks or low loaders or temporary ramps and transported directly to their destination.

In April 1959, Land & See obtained its first “warehouse” which was actually nothing more than a wooden shed located at the former Hannoverschen Bahnhof at Lohseplatz. Today, the site belongs to the Hafencity. 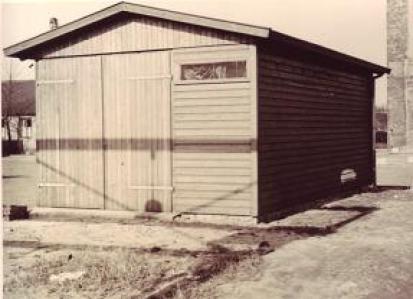 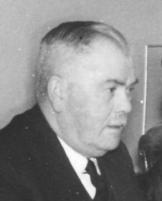 Robert Herrmann Leinweber (photo), founder of the company, passed away on 3rd February 1962.

1962 and 1963 saw the business expanding to include “lighterman business” and “short haul transport”. The warehouse was still very small, but was being used more and more for the storage of goods belonging to the Company’s customers. It was due to this fact that the warehouse was enlarged frequently and changed its location often in the following years. 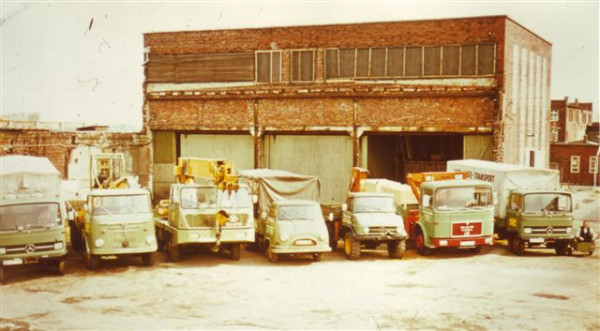 Jürgen Leinweber started his apprenticeship in the family business in April 1965. 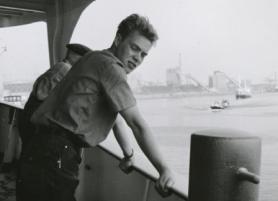 The first storage facility with a floor area of 4,000 m2 was built on the new site, which had first been leased in 1973, in Hamburg Wilhelmsburg, and is still being used today. Our own lifting gear was used to assist in the construction work. 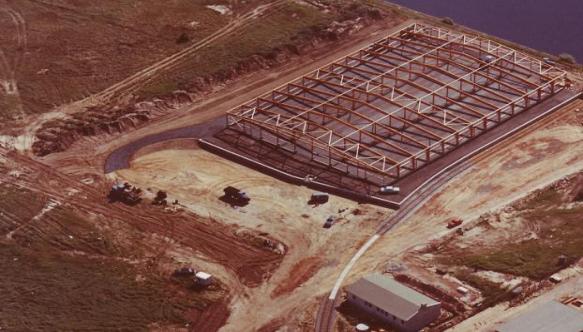 All operations were transferred to the new site

All operations were transferred to the new site in 1978.

In 1981, Jürgen and Dirk Leinweber were appointed directors, thus representing the third generation of Leinwebers.

By 1982, two additional warehouses, a workshop and another office were constructed at Pollhornweg. The handling facility for tri-modal operations between road, rail and sea remained for some years in full operation until container transport finally conquered the market. 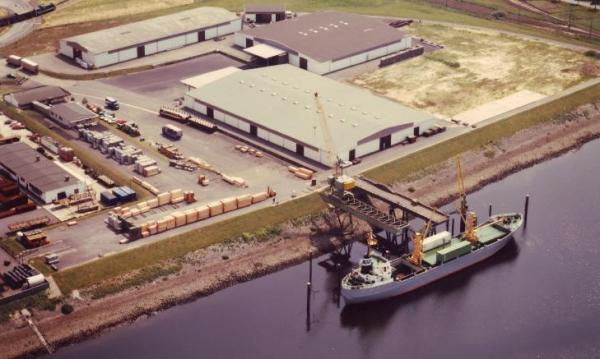 During the course of the last ten years, Warehouse 4 had been built, and Warehouses 5 and 6 were planned for construction on a sandy area to the south. Consequently, the new building in 1988 was given the name Halle (Warehouse) 7. The rail and ship handling facilities, meanwhile, were hardly used. 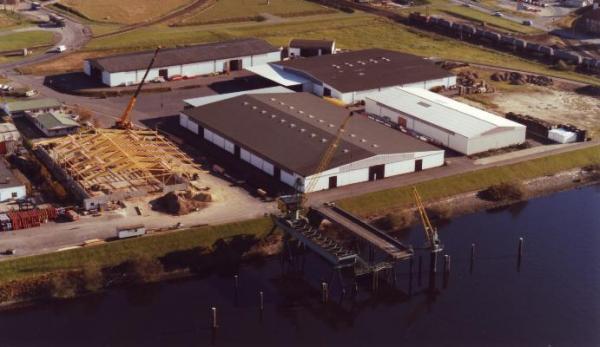 Construction of Warehouses 5 and 6 had been completed and were in operation. After first completing his apprenticeship as a freight forwarding agent in another company, Joachim Leinweber joined the family business Land- & See- Transport as an employee. He spent the first two years up to 1998 studying at the Deutschen Außenhandels- und Verkehrsakademie (GermanAcademy for Foreign Trade and Transport Economics) and graduated as a Business Economist for Transport Economics/Logistics.

It was during this period that a new office building was constructed and the first homepage was launched. 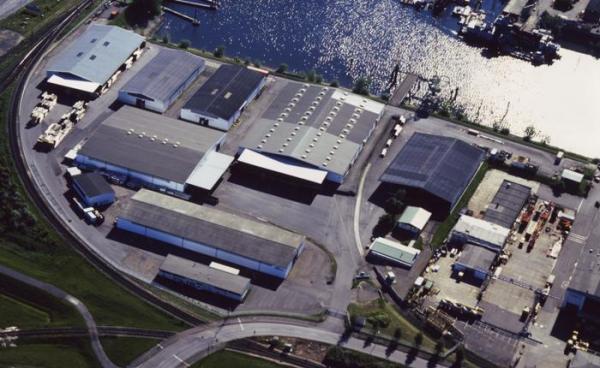 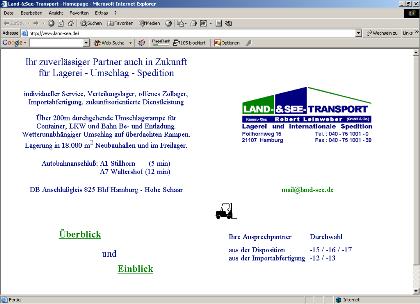 Warehouse 8 was completed. Previous to this, the quayside crane facility had been removed after standing unused for almost 20 years. Also, at the same time, the railway siding ceased operation and was decommissioned a few years later. 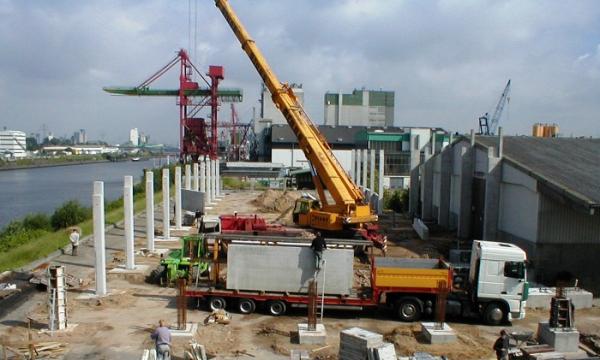 Jochim Leinweber joined the management and, for a short period of time, the traditional family business was managed by three generations of Leinwebers until Robert Gustav Hans Leinweber, who had participated in the daily running of the company until over the age of 90, passed away in 2008.

The gap between Warehouses 4 and 5 was closed and became Warehouse 10. This resulted in an additional area of only 500 m2, small but very useful for logistics purposes. 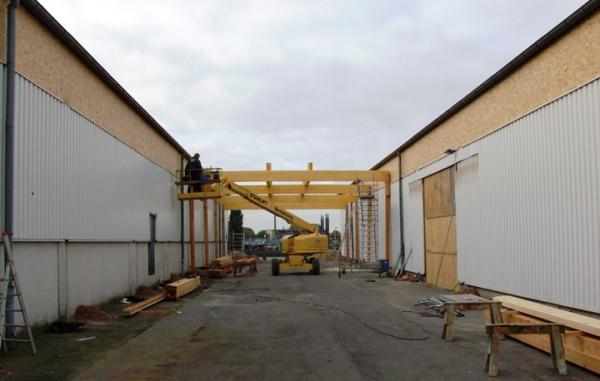 On 1st June 2011, the newly-established forwarding company “Leinweber Lagerei & Spedition GmbH & Co.KG” took over the operating business at Pollhornweg 15. Joachim Leinweber was now the sole managing director. The traditional family-run business was now in the hands of the fourth generation of Leinwebers. 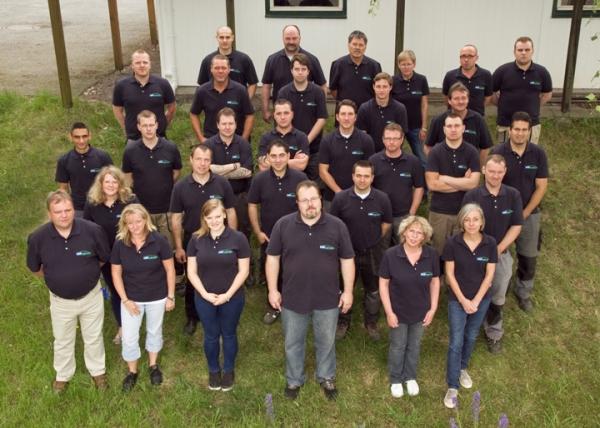